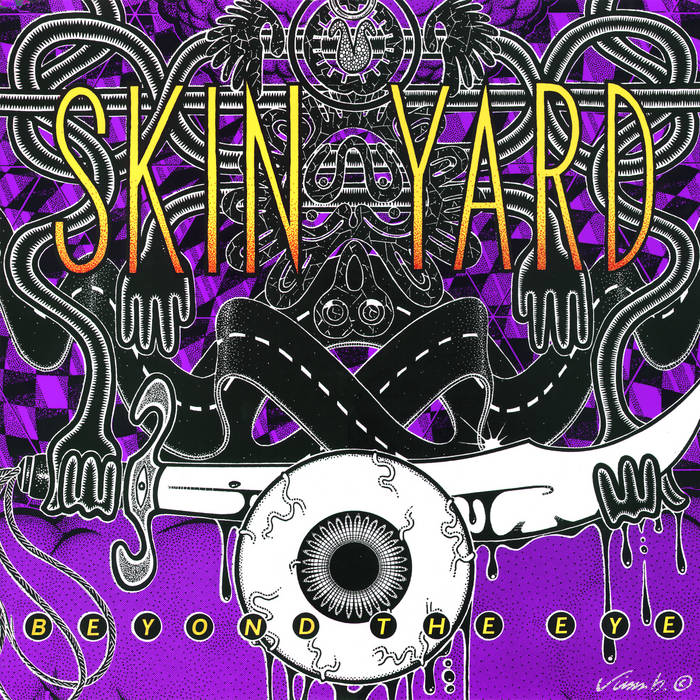 Sully Holmes As if this album couldn't sound even more badass, Jack Endino once again takes an already awesome album, and makes it even better! The amount of clarity and new layers you can hear in this remaster make the songs sound much more full and intricate. An amazing record all around, I would definitely recommend purchasing this download since its not on any streaming platforms. Favorite track: Across The Wind REMIX.

READ PLEASE: This is a completely remixed, reworked and expanded version of the 5th Skin Yard album, originally titled "Inside The Eye". There will not be vinyl. Co-founder of the band, bassist Daniel House, is not on it, so you may not see much about this on the official skin-yard.com site; and singer Ben McMillan has sadly left the building, so this somewhat orphaned, transitional record is now my baby.

Background: when Reciprocal Recording closed in summer 1991, I floundered somewhat for the next couple years between different studios, trying to find a mixing room I could be comfortable with. My mixes from that era suffered a bit, including this album, completed (like "Fist") as the band broke up.

With new bassist Pat, we had written new songs after the "Knuckles" album, and did a "demo" session at Reciprocal in May 1991 right before the studio closed, using Chris Hanzsek's Otari MX80 24-trk at 15IPS, but the songs were new and mostly played too fast. We then spent summer and fall of 1991 touring and playing these songs, which evolved and got better. In early 1992, the band split (amicably) one last time: Ben's "side-project" Gruntruck had signed with Roadrunner, and Barrett was invited to join Screaming Trees!

But we all agreed to do one more Skin Yard album of the songs we had written and played throughout 1991, so in April 1992 we went into Avast Recording for our final session, trying to record all our "post-Knuckles" songs the way we had played them on the road. We used Stu's Ampex MM1200 16-track 2 inch at 15IPS. We needed two extra songs so Ben and me wrote "Miss You" and "Undertow" in the studio. We improved on everything else except "Fight" and "Western Wall", and then Ben got so busy with Gruntruck that I couldn't get him to come in and finish vocals on our new versions of "Blindfold" and "Slow Dive", so I had to fit the 1991 "demo" versions of those four songs alongside the 1992 recordings on the rest of the album, which was finally released in 1993.

Fast-forward to the 2020 Lockdown, and I had the old 2" tapes and a food dehydrator to bake 'em, 30 years of mixing experience, and nothing but time... Why not remix the damn record like I did with "Fist"? On some songs I had originally gated the snare like an idiot (it was the era!) but now you can hear Barrett's grace notes. And now it's a cinch to fly a vocal from one recording onto another, so "Blindfold" and "Slow Dive" are presented as intended: the unheard 1992 full band versions of those songs in their final, fully-fleshed-out form, complete with all overdubs done at the time, but with Ben's 1991 vocals dropped in! I had no hesitation about just substituting these versions into this "new album" sequence, and you will hear why. The 1991 versions of those two songs (as used on the original album) are now remixed bonus tracks here, just for completeness. You be the judge. I was also able to fly some of my 1992 guitar parts back into the 1991 versions of "Fight" and "Western Wall", which was fun. (I had played it better so why not?) But nothing was re-recorded and no drum triggers were used. The other two bonus tracks here are the May 1991 demo versions of "Inside The Eye" and "Not In Love", never heard before, played blazing fast! Enjoy!


P.S. Click "info" next to each song for more notes!
P.P.S. No clicks tracks were ever used on any Skin Yard album! :-)

Bandcamp Daily  your guide to the world of Bandcamp